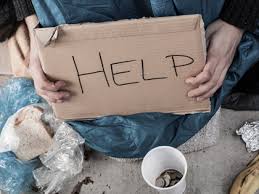 After a couple of years of working a daily breakfast at a homeless shelter, I thought it would be helpful to run a coat drive and hand out warm clothing items out of the back of my truck one morning. So I solicited friends, family and co-workers to give me any good condition, warm jackets, hats and gloves for this cause. I also spent some of my own money at local thrift shops and searched for items of good condition for the upcoming give-a-way. By the day of the event, I had about 30 warm jackets in sizes from medium to triple X. I had the foresight to presort the jackets by size so I could more efficiently fill the orders as I imagined folks would line up behind my truck and allow me to wait on them one by one.

When I pulled up to the shelter, I hopped out of my truck and opened the hatch. Within a few minutes, a man stopped and asked what I was doing. I explained that I had warm coats, hats and gloves to give to those in need. He asked if he could have a look at what I had. I looked him over carefully as he was already wearing all the items I had to give and they appeared to be in good condition. I begrudgingly agreed and we sorted through my truck and I gave him a jacket, hat and gloves. Hmm.

Now, the first guy nosing through the back of my vehicle seemed to attract attention. Now, there were  about eight to ten men all around me trying to reach in to see what I had to offer. I politely asked the guys to step back, allow me to help them one at time and I assured them I had enough for all of them. The crowd graciously complied. After fulfilling the first few orders, the next man stepped up and asked for an extra-large-sized jacket. I quickly handed him one, as I knew exactly where each jacket size was located. He examined the jacket then looked at me and said, “You have anything else?” I was floored. My mind really got the best of me and I was angry. After all, I just gave the man the size he asked for. It is a clean, good condition warm coat. There’s at least a dozen other people in line behind him. What does he think this is; a department store? Perhaps he’d like to step into the changing room and try it on? Or bring two or three jackets with him and he can pick from among them? Just who does this guy think he is anyway?

I asked him if there was something he wanted in particular. He said, “Yes, I was hoping to get one with a hood.” So I located a hooded, XL jacket for him and he was satisfied. I was so busy with the rest of the give-a-way, I didn’t really process what had just happened until my drive home. Then it hit me.

I totally judged this guy. He I thought I was trying to help. I gave him the size he requested. He had a simple request that I hadn’t even considered. And who am I to think that just because someone is homeless, that doesn’t have a permanent address, that he or she doesn’t have preferences? Does homelessness cause a person to no longer have a favorite color or lose all sense of style or preference? My first thought was, “Look, pal, I just gave you the jacket size you wanted so just move along.” I felt ashamed at how quickly I could discount someone else’s thoughts or feelings on such a trivial matter. Here, I’m supposed to be serving the homeless and yet I disrespected this man, in my own mind, as quickly as one could say “hooded jacket, please”.

The truth is, I was that guy with the crick in my neck from trying to look at the traffic light out of my left eye so I wouldn’t have to make eye contact with the guy flying a sign outside my driver’s side window. Not long ago, I silently believed many of the generalizations about the homeless – lazy, drug and alcohol addicted, dirty and smelly, lacking of self-respect and simply milking society for what they can get for free. I’m not suggesting that all the homeless are fine people with astounding character, however, neither are we who live more conventional lives. Living in a homeless lifestyle does not necessarily equate to the stereotypes.

– Excerpt from “Those People – Lessons Learned from the Homeless”, due to be released in Fall 2018

One thought on ““THOSE PEOPLE” an excerpt from the upcoming book”